by The Racing Reporter 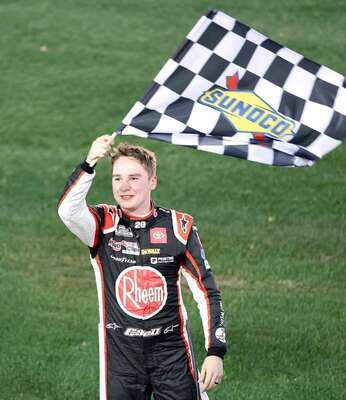 “This is the high of my life so far,” he said. “So incredibly thankful to be here for Joe Gibbs Racing. I've prepared all of my life for this moment to race in the Cup Series. Last year was a huge learning curve for me, and I’m very grateful that I got the opportunity to run in Cup. It definitely prepared me to move to Joe Gibbs Racing.

Bell said capturing his first Cup win a day after Ty Gibbs won in his Xfinity Series debut was “Unbelievable.” Logano had led 10 of the final 13 laps but on the next-to-last lap, Bell closed the gap. As the two leaders entered the frontstretch chicane of the road course, Bell powered to his inside and came away the leader to start the final lap.

“He had newer tires,” said Logano. “One more caution lap would have been enough to allowed us to stay out front. I tried to get all I could out of that last restart, because I knew I was going to need it, because he was going to catch us pretty quick.

“We've made a lot of gains on our road courses. You can tell we're not quite good enough yet, but we maximized the day. I hate being that close, but congratulations to Christopher.”

Chase Elliott won Stage 1, and led the most laps in the race (44). He probably had the fastest car, but a series of bad-luck incidents may have cost him the race.

Twice he had lengthy pit stops. Each time he went in first, but came out back in the field and had to work his way back towards the front. He was involved in contact twice, from other cars, and on lap 61, was bumped by Denny Hamlin and spun out. He finished 21st.

Ty Gibbs turned in a stunning performance in his first Xfinity Series start. The 18-year-old held off reigning champion Austin Cindric on the Daytona Road Course. He took the lead on a restart in double overtime and held off Cindric by 1.726 seconds at the finish line.

“The family is everything to me, they do so much for me,” Gibbs said. “I just can’t thank them enough, this is just amazing; this is a dream come true. It’s all the man above, I’m sorry I’m a wreck. I didn’t think this was going to happen at all. This is awesome, I can’t thank everybody enough watching and last week I had a terrible interview. I want to apologize for everybody, I just can’t thank everybody enough. This is just amazing.”

Gibbs becomes only the sixth driver to win in his first series start – matching a feat achieved by NASCAR Hall of Famer Dale Earnhardt in 1982 and most recently, Kurt Busch, 15 years ago.

He is also the youngest driver to win a NASCAR Xfinity Series road course event. At 18 years, 4 months, 16 days, he breaks the record most recently held by Cindric (20 years old).

Cindric and A.J. Allmendinger crashed racing to the finish of the first stage, and Cindric was left with a gaping hole in his front fender. He dropped to 34th in the field but still drove his way back to the lead.

He led a race-high 29 laps, and had a Daytona sweep in sight until a caution with three laps remaining gave Gibbs a chance. They both pitted for fresh tires, and Gibbs restarted 10th, Cindric in 11th.

Gibbs on the first overtime restart blew past a pack of cars and weaved his way in and out of traffic all the way to third. Another caution sent the race into double OT, and Gibbs this time drove inside for the lead.

Ben Rhodes has had two perfect race outings at Daytona. He won the Truck Series opener on the oval last week then came back to win Friday night on the infield road course.

Rhodes, 23, of Louisville, Ky., crossed the finish line .320-seconds ahead of Sheldon Creed, when a caution came out, freezing the field with a half-lap remaining in overtime.

“Unbelievable, I don’t even have words for it,” Rhodes said. “I don’t even know what to say, this is so cool. I just have to thank my team. ThorSport Racing gave me a truck that handled this year and we were fast. Rich (Lushes) is a really good crew chief. It’s good to be paired up with him and all of the guys on my team. I’m just thrilled. I don’t know what to say. I’ve been on cloud nine all week, so it’s above that. I’m just so happy.” John Nemechek was third, followed by Todd Gilliland, Riley Herbst, Matt Crafton, Derek Kraus, Kaz Grala, Timmy Hill, and Christian Eckes.

The race started under wet conditions with teams having to decide when the track was dry enough to switch from rain tires to slicks or “dry” tires. Nemechek was the early leader – pacing the field for the opening 14 laps until his No. 4 Toyota suffered an oil pressure and fuel pick-up problem, leaving the truck on the track and necessitating a caution. Later he ran out of gas and at one point was a lap down to the leaders before racing back to the front in the closing laps.

“This is an awesome opportunity and I’m genuinely excited to get back in a racecar,” said Waltrip, who owns 17 victories across NASCAR’s top-three national touring series. “I still love racing and I still want to compete. SRX is a great platform and all of us want to win. We might have gray hair and maybe even no hair, but when we put that helmet on and go race, the desire and talent is still there. You want to see a show? We’re gonna put on a show.”

Racing Joke: Denny was alone in an elevator when a girl stepped in with a phone pressed to her ear.

“I have to go,” she told the person on the other end. “There's a cute guy standing here.”

Before Denny could react, the girl turned to him and said, “Sorry for lying, I just wanted to end that conversation.”

Last Week's Question: Derrike Cope, who started this year's Daytona 500 has one 500 victory. What year did he win? Answer. He won the 1990 Daytona 500 driving for Bob Whitcomb.

Gerald Hodges/the Racing Reporter is a syndicated NASCAR writer and author. You may e-mail him at: hodges@race500.com.