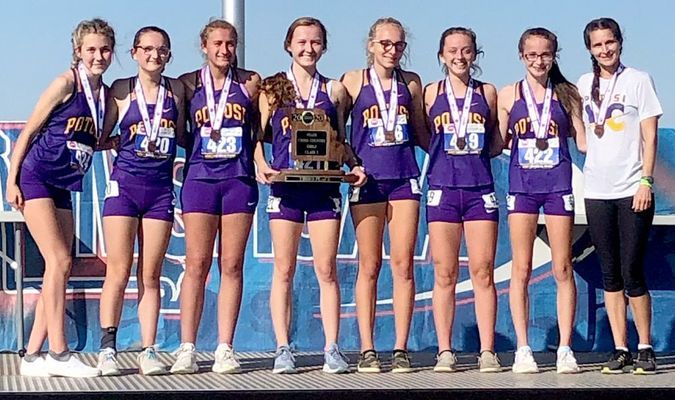 CLINCHED 3RD IN STATE! – The Lady Trojan Cross Country runners captured a place on the podium and hoisted the 2020 trophy for 3rd Place in State Class 3 competition on Thursday, Nov. 5th in Columbia. The team ran well in some very warm temperatures and serious competition. From left, representing the Trojans are Alyson Skiles, Carlee Moss, Gracie Shutz, Hallie Portell, Kaydence Gibson, Emily Hochstatter, Celeste Sansegraw and Coach Amanda Politte. Sophomore Celeste Sansegraw got All State honors with a 21st Place finish in the Class 3 competition. There were 16 teams represented at the State Meet. (Submitted Photo) 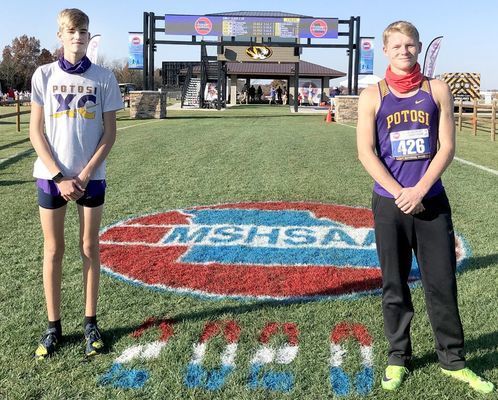 TROJANS AT STATE – Freshman Zeke Sisk, at left, and Senior Will Jarvis, at right, pose for a photo at the State Cross Country Meet on Thursday, Nov. 5th in Columbia.(Submitted Photo) 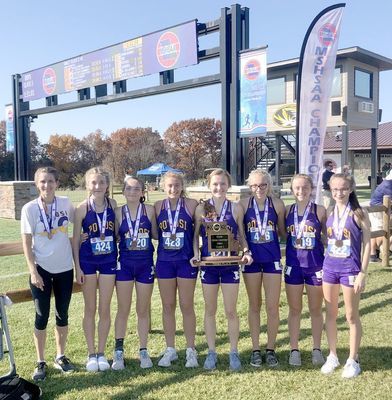 GIRLS SUCCESSFUL AT STATE MEET – The 2020 Lady Trojan Cross Country Team are all smiles with their medals and State Trophy for 3rd in the Class 3 competition. Celeste Sansegraw earned All State Honors for the second year in a row with a 21st place finish. (Sub. Photo)
Previous Next

The Trojan Girls Cross Country Team was in Columbia, Missouri for the High School State Meet on Thursday, Nov. 5th, 2020.

The Ladies qualified as a team after winning the District Championship in Arcadia Valley the Saturday prior. The Trojan Girls did well and placed 3rd as a team and were on the podium with a State Trophy.

Sophomore runner Celeste Sansegraw earned her 2nd All State Honor as she was All State as a Freshman at last year’s meet. Runners who earn All State Honors do so by placing in the top 25 of their race at the State Meet in Columbia.

There were 16 teams represented in the Girls Class 3 State Meet and Potosi clinched 3rd for the Trojans.

The last time a Potosi Girls Team was on the podium was in 1994 under Coach Paul Fitzwater when they placed 2nd in State.

Coach Amanda Politte said, “Covid and quarantines have been challenging. We’ve not always been able to compete as a complete team during the season due to the quarantines.”

The teams, both girls and boys, had to deal with a very unusual season as some meets were cancelled and others were added at last minute to runners could have an opportunity to compete.

Coach Politte pointed out, “We added a three mile race when St. Vincent cancelled and Farmington added a night time 2 mile race on the track under the lights to help make up for for cancelled meets.”

Coach when on to say, “We saw ‘mask mandates’ in some counties and other not. Some meets were held without spectators due to regulations of the host counties.”

The State Cross Country Meet at Columbia only allowed 2 spectators per competitor, and that was in and out for their specific race. “Parents were allowed in to watch their kids and then in was out again,” said Coach Politte.

The State Meet was broken up into a three day event this year, when it typically is a single day with all competitors. This year Class 3 was held on Thursday, Nov. 5th with Classes 2 and 4 on Friday, Nov. 6th and Classes 1 and 5 on Saturday, Nov. 7th.

Coach Politte, looking back on the season, said, “Our girls had a great year. The team only lost to Class 4 schools, and only lost to four of them.”

The Lady Trojan Runners were second in Conference behind a strong Farmington team who went on place 5th in the Class 4 State Meet.

Politte said, “MAAA Conference had lots of strong girls teams this year. Arcadia Valley girls took 1st in Class 2 at State. Valle Catholic girls took 2nd in Class 1 at State. We were 3rd in State and Farmington was 5th in Class 4. That’s a great showing from all of our girls and it lets everyone know how competitive a year it was.”

“Our guys need to be recognized as well. We had two young men qualify for the State Meet - Senior Will Jarvis and Freshman Zeke Sisk. The guys both ran better than their times had been going in to the race. Zeke Sisk finished 62nd and Will Jarvis finished 68th. They did very well,” said Coach Amanda Politte.

“Our Trojan Boys Team was also 2nd in Conference behind Farmington. The guys finished 3rd at District, just missing the State Meet as a team by only 8 points,” said Politte.

Coach said, in her final thoughts on the year, “The runners all did well and stayed in and worked hard. I’m proud of all of them. The future looks good for Trojan Cross Country. We are only losing 2 Seniors on the Girls and losing 2 Seniors on the Boys as well. We all are looking forward to getting back to some kind of normal and heading to Track season in the Spring. I do want to thank all the parents, the school district and the community for the support of our runners. It’s great!”