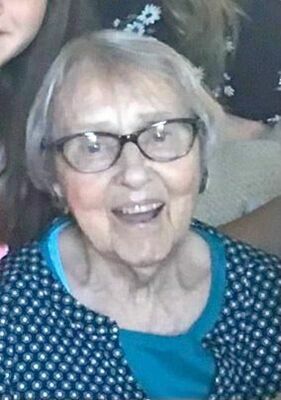 In the early morning hours of Friday, January 7, 2022, Leone left the comforting arms of her daughter

Judy and went into the merciful arms of Jesus. Leone was 91 years old. Not many days previous Leone

listen to his teaching.

Leone was born on June 23, 1930 in Shirley, MO to Francis Compton and Gertrude E. Compton. Leone

was the eldest of three children born to the couple. She had older half-siblings from each of her parents

whose spouses had died from illnesses.

Leone grew up on a farm in Shirley, but by the time she was a young teen her father had suffered from

strokes so the family of five moved into the town of Potosi. After WWII, Leone became infatuated with a

1947 Leone became Mrs Paul Eye. Two girls, Paulette and Judy, were added to their family while living in

Potosi. In 1956 the couple along with another young family journeyed to San Diego to start a new life. It

was there that son Steven and daughter Marianne were born, which completed their family.

In 1973 Leone, Paul and three of their children returned to Potosi to care for her mother Gertrude who

passed away in the fall of that same year. A move was then made in 1974 to Aurora, CO taking with

them the younger two children. Leone and Paul relocated once more in 1982 to OKC where daughter

Judy and family lived and again in 1996 to Melbourne, FL to be near daughter Paulette and family. In

2009, Leone realized she needed help with caring for her husband so the couple made one final move

and returned to OKC to be close to their loved ones living there. From the fall of 2017 until Leone went

into assisted living, she was given compassionate care by Marianne in her home.

Leone and Paul truly LOVED traveling America. While their children were still home, they took the family

on trips. Then later, just the two of them would spontaneously take off to explore. Leone especially

loved the U.S. southwest. She collected several pieces of Native American artwork. Leone was known for

taking hundreds of pictures, creating album after album of their journeys. Leone and Paul made one trip

overseas to Japan to visit Paulette and family.

Leone was a devoted wife and mother. Leone took care of her husband Paul until no longer physically

able. Growing up she enjoyed attending church, singing and playing the piano which continued through

her life. Leone loved God’s Word and encouraged her children and grandchildren to put God first and

the importance of a prayer life. Leone was quite the seamstress and quilt maker. She made quilts for

wife Jean and many nieces and nephews. Her daughter and son-in-law, Paulette and Rick Manley,

grandchildren. ALL of whom she LOVED!

Due to COVID protocols, a small family memorial service will be held at the home of Judy and Chuck

A special thank you to the wonderful staff at Bellevue Health and Rehabilitation Center, Wing Three. The

staff went above and beyond to give Leone such loving, compassionate care.