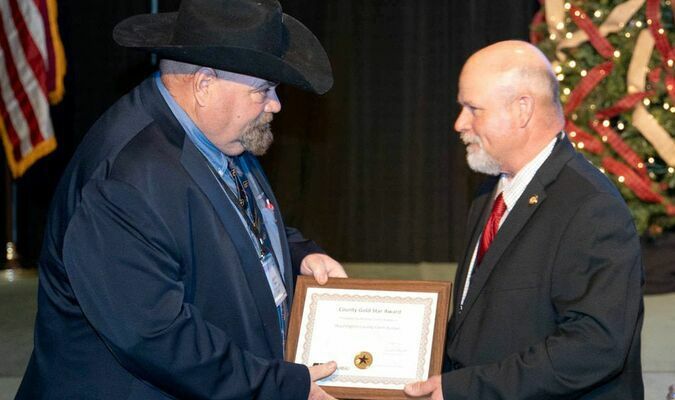 GOLD STAR AWARD TO WASHINGTON COUNTY – Farm Bureau Board Member Chris Brundick presented County Board President Jim Reed with the Gold Star Award. Washington County was one of only thirty-six counties to receive the recognition in the State of Missouri.

JEFFERSON CITY – Individuals were honored with the Missouri Farm Bureau (MOFB) Outstanding Service to Agriculture Award December 6. The presentations were made by MOFB President Garrett Hawkins during the opening session of the organization’s annual meeting at the Lake of the Ozarks.

The award is given annually to select individuals who have demonstrated their desire to work closely with Farm Bureau and have supported agriculture throughout their careers. This year, they are Missouri Governor Mike Parson, past MOFB President Blake Hurst, past assistant to four MOFB presidents Debbie Johnson, agricultural educator Leon Busdieker, Senior Director of MOFB’s life and brokerage companies Mike Voiles, and MOFB Senior Director of Regulatory Affairs Leslie Holloway.

Governor Mike Parson has been a long-time friend of Farm Bureau as a Polk County sheriff, state representative, state senator, lieutenant governor and now governor. While in the state legislature, he sponsored and co-sponsored several landmark pieces of legislation including the Missouri Farming Rights Amendment, a piece of legislation that changed the Missouri Constitution to guarantee all Missourians the right to farm and ranch. He has led improvements in access to affordable broadband and addressed flooding concerns through his flood recovery advisory working group. When he’s not in Jefferson City, the governor makes his home in Bolivar with his wife, Teresa. Together they have two grown children and six grandchildren. He is a small business owner and is a third-generation farmer who currently owns and operates a cow/calf operation near Bolivar.

Blake Hurst served as MOFB president from 2010-2020, vice president for seven years, District 1 board member for eight years, and Young Farmer and Rancher chairman in 1984. Farm Bureau has been a life-long family endeavor for the Hurst’s dating back to their time on the Young Farmers and Ranchers Committee. As president, he served on the American Farm Bureau board and many other boards, councils and advisory committees. During his years leading the organization, Hurst and his wife, Julie, were a team and had a full family behind them. In recent years his daughter, Lee, and son-in-law, Matt, served as Atchison County Farm Bureau president. Through his writing and public appearances Hurst remains a strong spokesperson for agriculture.

Debbie Johnson retired from MOFB in January 2020, but during her 35 years of service she was the assistant/executive secretary to four MOFB presidents: C.R. Johnston, Don Fischer, Charles Kruse and Blake Hurst. Johnson she was behind the scenes at every major Farm Bureau event making sure every detail was covered. She is known for her warm smile and laugh, her delicious baking and the pride she exudes when sharing stories about Mike, her husband, daughters Jessica and Meghan, and her sons-in-law and grandchildren. They make their home in the Centertown area.

Leon Busdieker retired as director of Agriculture, Food and Natural Resources for the Missouri Department of Elementary and Secondary Education and state FFA advisor June 30. He spent 43 years in agriculture education. Known for his humble, calm approach to leadership, the Missouri FFA Association made great strides under his guidance. The National Association of Supervisors in Agricultural Education (NASAE) named Busdieker the 2020 Outstanding State Supervisor. He has been active in Farm Bureau for many years and is a past chairman of the MOFB Sheep and Goat Advisory Committee. He serves as the superintendent of sheep and dairy goat shows at the Missouri State Fair. His family resides in Hawk Point.

Mike Voiles has served MOFB and its members for 42 years, most recently as senior director of Farm Bureau Life Insurance Company of Missouri and MOFB Insurance Brokerage. He has a tremendous knowledge of the insurance industry and Farm Bureau that has made him a part of much change through the years. Voiles’ contributions have helped Farm Bureau’s insurance operations grow while remaining strong. He retires December 31. Voiles and his wife, Becky, reside in Jefferson City.

Leslie Holloway began her career with MOFB in 1995 when she was hired to work in the president’s office handling regulatory issues and other special assignments. She went on to serve as MOFB’s director of state and local affairs and will retire December 31 as senior director of regulatory affairs. Prior to joining the Farm Bureau team, Holloway worked at the Missouri Department of Agriculture under then Director Charlie Kruse. After receiving a degree in Agricultural Science, Leslie started her professional career on Capitol Hill working for a member of Congress and then a trade association before she and her husband Tom moved to Missouri. Through the years she has stood alongside Farm Bureau members in many local meetings defending private property rights and promoting common sense policies.

R3 HALL OF FAME INDUCTEES TO BE HONORED JAN. 28T