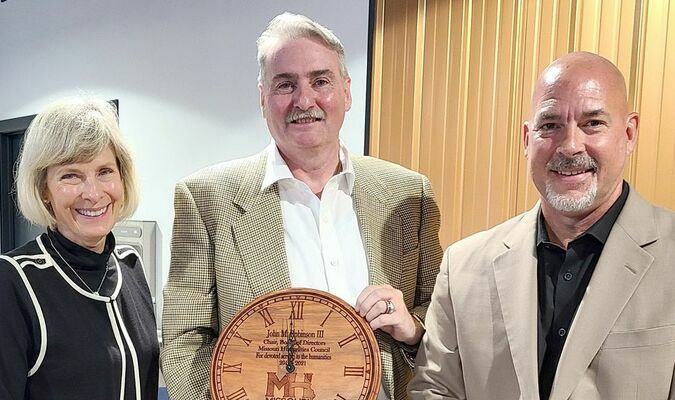 [Perryville] On Saturday, October 23, 2021, Washington County native and Caledonia resident John M. Robinson, III was recognized as outgoing Chairman for the Missouri Humanities Council at their quarterly board meeting.

Currently celebrating its 50th anniversary year, the Missouri Humanities Council (MHC) is a nonprofit organization with a mission to create a more thoughtful, informed, and civil society by supporting and presenting humanities-based programs that serve and benefit the people of Missouri. Established in 1971, the MHC is the only statewide organization devoted exclusively to public humanities programming.

John M. Robinson, III joined the statewide board in 2016 and was elected the organization’s Treasurer (2016-2018) until 2018 when he was elected Board Chairman. This position by the organization’s Bylaws is generally for two year, but due to COVID and under unusual circumstances, the full Board voted to make a consideration to their Bylaws for one year and re-elect John to an unprecedented third term in 2020. John Robinson, III accepted the results of the election and served one additional term as chairman for the organization.

During its weekend meetings held in Perryville, MO, the full board voted in new officers for the 2022 fiscal year. Mrs. Marilynn Bradford of Jefferson City, MO was elected chairman of the board.

John M. Robinson, III had been awarded one of the MHC’s annual exemplary achievement community leader awards in 2015.