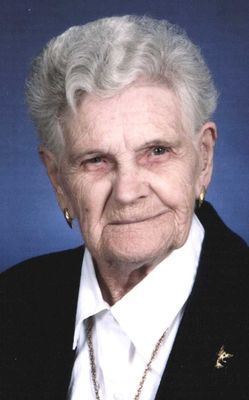 Lena Mae Smith of Potosi, was born on March 3, 1921 in Potosi, a daughter of the late Howard Lynn and Annie (Mercer) Smith. Lena went to her Heavenly Home and was united with her Savior, Jesus Christ, on Thursday, October 1, 2020 having almost attained the age of 100.

Lena leaves behind many dear nieces, nephews, and extended family who will forever cherish her memory.

Visitation was held on Monday, October 5th from 4:30 to 8 P.M. and Tuesday, October 6th beginning at 9 A.M. A funeral service to honor Lena began at 11 A.M., held at DeClue Funeral Home, officiated by Elder Leonard Compton.

Interment and final prayers were held at Sunset Hill Cemetery. Funeral arrangements were respectfully entrusted to the care and direction of DeClue Funeral Home.