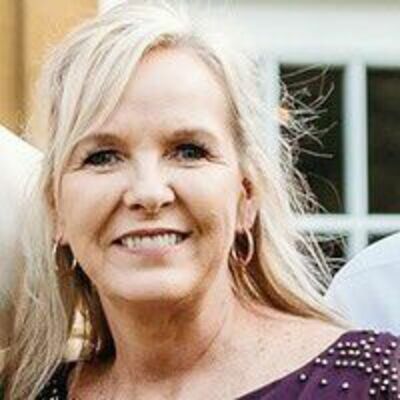 Kimberly Sue Adams of Eminence was born January 3, 1966, in St. Louis, to Leburn “Tom” and Carol (Vermillion) Mooney. She left this world too soon with her husband, Michael Adams, on October 3, 2021, in a tragic car accident. Kim’s greatest joy was spending time with her children, grandchildren and many friends.

She was married to Michael Jon Adams on February 14, 2006, in Eminence.

The most important and proudest role in Kim’s life was Mom and Nana. She loved bigger than anyone and was willing to help at a moment's notice to all family and friends. Any occasion with Kim was guaranteed to be fun, and she made the big and little moments special for everyone. Her ability to be compassionate, yet tell you what you needed to hear was unique. Camping and spending time on the Current River with friends and family in Eminence was her happy place. She loved Cardinal baseball, shopping for her children and grandchildren, and a good beach trip. She was a strong woman with a heart of gold whose role as Mom, Nana, Daughter, and friend will be deeply missed amongst so many. She was taken from us too soon, but her beautiful smile, get-it-done attitude, and infectious laugh will live on forever through those she impacted.

Kim is survived by many loved ones. She was the proudest Mom to her children, Lance Radosevich and wife, Sammi of West Plains, Blake Radosevich and wife, Erica of Salem, Morgan Adams of Eminence, and Hunter Adams and wife, Cheyenne of Eminence. She was the greatest Nana to four grandchildren, Emory, Max, Novah, and Maverick, with two new grandchildren on the way. She was a devoted daughter to parents, Tom and Carol Mooney of Eminence, and the younger sister to brother, Leburn Mooney, of Eminence. Kim had many aunts, uncles, nieces, nephews, cousins, and countless friends who meant the world to her.

She was preceded in death by her husband, Mike Adams; her brother, William Mooney; and maternal and paternal grandparents.

Funeral services were held on Saturday, October 9th at 12 noon at Leroy Lewis Memorial Gymnasium in Eminence with Pastor Randy Ferguson officiating, under the direction of Yarber Mortuary. Visitation for friends and family was prior to the service from 10 a.m. to 12 noon, also at the gymnasium. Interment followed in Horner Cemetery, Winona. Donations can be made to the Mike and Kim Adams Memorial Fund at any Security Bank of the Ozarks location. Condolences may be expressed at www.yarbermortuary.com.