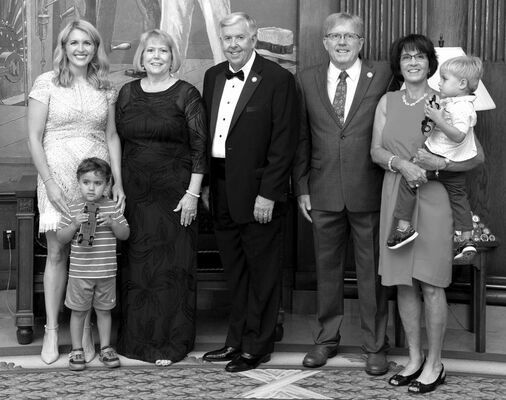 Thousands of Missourians converged on Jefferson City last Saturday to celebrate the state’s bicentennial, with a World War II nurse leading the parade.

Edith Harrington waved to the crowd from a military jeep, followed by about 100 entries that highlighted the history of the Show-Me state.

The 98-year-old joined the United States Cadet Nurse Corps in 1943. The festivities also marked the election of our state officeholders, because the traditional inauguration events were delayed due to the coronavirus.

I was proud to welcome numerous District 118 residents to the capital for the festivities, which included a ball hosted by Governor Parson.

With Missouri’s first two hundred years in the books, my goal as your state representative is to preserve the best of our past and work toward an even brighter future. As always, I welcome your input in the legislative process.

Members of the House and Senate returned to the State Capitol Building this week for the annual veto session. The Missouri Constitution requires the General Assembly to meet each year in September to consider bills that were vetoed by the governor. While in veto session, legislators have the opportunity to override the governor’s vetoes if they can obtain two-thirds majorities in each chamber to support the motion.

By a vote of 152-2, House members approved an override motion for the governor’s veto of $150,000 in funding contained in HB 4. The funds were appropriated by the legislature to reimburse legal costs for wedding venues that had fought a sales tax reconsideration made by the Missouri Department of Revenue. The maker of the motion said, “We have promised these people over and over and over again that we would do right by them only to have the rug pulled out from under them. I implore this body to send a message to the governor that we’re going to stand up for our citizens; that we’re going to give them their darn money back.”

House members also overwhelmingly supported the override of a line-item veto of $2.1 million in funding contained in HB 11. House members supported the motion by a vote of 151-3. The funding was appropriated by the General Assembly to provide a three percent pay increase for Children’s Division case workers and supervisors.

By a vote of 150-3, the House approved the override motion for the line-item veto contained in HB 12. The governor had vetoed $300,000 in funding contained in the bill that was appropriated for a task force to fight child sex abuse in Lincoln County. The funds were to be utilized to hire additional investigators and staff to handle the large number of abuse cases in the county. The maker of the motion said, “Lincoln County has reached a critical level of crimes against children and action is needed to prevent additional physical and sexual abuse of children.” He noted the task force was created to protect children and hold predators accountable. “This is a small piece of pie in our budget, but it can do so much good if we get it into the hands of the right people, and that’s what we’re trying to do.”

House members also voted 112-38 to approve a veto override motion for $700,000 in funding contained in HB 19. The funds were appropriated for the Business Loop 70 Community Improvement District in Columbia. “This is a Business Loop 70 project that the local CID and business partners are working on. They have a local match and they’re working on sidewalks and improvements to improve business in that area.”

While the House approved the override motions with strong majorities, the veto overrides were not approved by the Senate. With that, the governor’s vetoes will stand.

In the history of the state, the legislature has successfully overridden 119 vetoes. Of those overrides, 49 have been on budget line-items and 70 have been on non-appropriations bills. Prior to the administration of Gov. Jay Nixon, veto overrides had been extremely rare with the legislature completing a total of only 22 overrides in its history. During Nixon’s eight years in office, the number of veto overrides increased dramatically as the Missouri General Assembly overrode 97 of his vetoes.

House Speaker Rob Vescovo, Speaker Pro Tem John Wiemann, and Majority Floor Leader Dean Plocher this week submitted a letter to President Joe Biden calling on the nation’s leader to provide his legal justification for a proposed vaccine mandate for private businesses. The letter, which was written by Vescovo and signed by Wiemann, Plocher, and the House Republican Caucus, refers to the president’s directive as “an egregious overreach of federal authority” and as “blatantly unconstitutional.”

The three House leaders said their goal with the letter is to give a voice to the many Missourians who are outraged by the president’s directive to enact an emergency temporary standard based on OSHA’s regulatory authority requiring private businesses with more than 100 workers to make COVID-19 vaccination a condition of employment. They noted that as elected officials it is their duty to protect the constitutional rights of the citizens of Missouri.

“It’s clear there is no legal precedent or constitutional authority granted to the president that allows him to trample on the constitutional rights of Americans. This proposed vaccine mandate is a clear overreach of federal authority and something we will fight wholeheartedly to defend the freedoms of our citizens,” said Vescovo, Wiemann, and Plocher.

The letter states, “No existing federal law imposes vaccination requirements on the general population, and for good reason.  The authority to do so is nonexistent. Even Congress lacks the authority to enact a policy like the president intends to impose.”

With the letter, the three House leaders call on President Biden to provide sufficient legal basis for the “proposed directive that appears to trample on the constitutional rights of American citizens.”

The letter states, “Should you not be able to provide sufficient legal justification, which ostensibly does not exist, we demand that you immediately rescind your directive to OSHA regarding a vaccination mandate on private businesses.”

Rep. Dean Plocher Selected to Lead the Missouri House of Representatives in 2023

This week the members of the House Majority Caucus unanimously selected State Representative Dean Plocher to serve as the next Speaker of the Missouri House of Representatives. For the upcoming session, Plocher will continue his current role as Majority Floor Leader and serve as the Speaker designee. For the 2023 session, the full body will have the opportunity to officially elect Plocher to the position of Speaker of the House.

“I want to thank the majority caucus for their unanimous support and their confidence to lead us forward in these historic times,” Plocher said. “The work we have before us is both challenging and important. Missourians expect us to pass commonsense bills that protect our freedoms and preserve the Missouri values that have made our state great.”

Plocher was first elected to the House of Representatives in a Special Election in November 2015, and represents Chesterfield, Country Life Acres, Crystal Lake Park, Des Peres, Frontenac, Huntleigh, Kirkwood, Ladue, and Town and Country in St. Louis County. Rep. Plocher received his B.A. in Political Science from Middlebury College, where he was a four-year letter winner in football. Following Middlebury, Plocher worked in the financial management industry for Franklin Resources, Inc. He earned his J.D. from Saint Louis University School of Law where he also was awarded a Certificate in International and Comparative Law.

In addition to his legislative duties, Plocher is a practicing attorney, managing his own law firm in Clayton, Missouri. Plocher lives in Des Peres with his wife Rebecca, and their two children.

“I look forward to leading my colleagues in the Missouri House in 2023, to do the work we were sent here to do – which is to do our best every day to address the challenges before us with common sense, purpose, and dedication to the cause of leaving Missouri better than when we arrived,” Plocher said.

As the House Elections and Elected Officials Committee met this week to discuss possible changes to the state’s elections process, Secretary of State Jay Ashcroft made clear his plans to support legislation that would keep voting secure and accurate in upcoming elections.

This week Ashcroft released the findings of a voter fraud investigation involving two voters in St. Charles County. He said his goal is to be proactive rather than reactive as the state works to protect the integrity of the elections process while also ensuring no voter is turned away from the ballot box.

Ashcroft said, “I want to make my position clear to anyone who thinks that the number of fraud cases should determine whether legislative change is necessary. One case or one thousand cases – our response is going to be the same. We will push for legislation to make sure voter fraud doesn’t exist, and the voting rules applicable to one voter apply to all voters. It’s that simple.”

Ashcroft said he plans to work with the legislature to enact safeguards that would include:

·Enacting legislation, with the necessary funding included, that would allow the secretary of state to audit election results.

· Procedures to limit the handling of cast ballots by election authorities and eliminate the curing of absentee ballots.

· Requirements for election authorities to maintain accurate, up-to-date voter rolls and withhold funding if necessary for noncompliance and allow the secretary of state’s office to audit the list of registered voters for accuracy and accountability.

· Physical cybersecurity testing at the local level by the secretary of state’s office or authorized party that includes penetration testing of vendor machines, programs and systems.

· Election equipment that is not capable of internet connectivity to avoid the possibility of electronic manipulation.

· Disallowing election law or rule changes less than 26 weeks prior to a presidential election.

· Elimination of third-party compensation for those who solicit voter registrations.

Ashcroft said, “In-person voting with a photo ID makes it difficult to manipulate the system and easier to identify fraud.  As well, hand-marked paper ballots and using equipment that is not capable of being connected to the internet makes voting less susceptible to suspicion and therefore, may increase voter confidence and turnout.”

He added, “Having a set of defined parameters for running good elections makes it clear to voters after the election that the system worked and therefore they can have confidence in the results. You can have both – secure elections and voter participation.”

Johnny Morris Inducted into the Hall of Famous Missourians

Lawmakers and distinguished guests gathered in the House Chamber this week to pay tribute to one of the state’s greatest entrepreneurs and conservationists. House Speaker Rob Vescovo hosted the event for former House Speaker Elijah Haahr, who selected Bass Pro CEO Johnny Morris for induction into the Hall of Famous Missourians.

Morris, who is from Springfield, MO, started out in 1972 by selling fishing tackle out of the back of his father’s store. He went on to become one of the most visionary and influential retailers in modern history. Bass Pro Shops now has 200 retail stores and marine centers across the nation, and welcomes more than 200 million visitors annually. Morris also revolutionized the marine industry with Tracker boats, which are the best-selling fishing boats in the country. A leading conservationist as well, Morris has received the National Audubon Society’s Audubon Medal for his lifelong efforts to protect wildlife habitat and connect more people to the great outdoors.

House Speaker Vescovo referred to Morris as an outstanding Missourian “who has made a lasting positive impact not just on our state, but on our nation, and even the world.”

Former House Speaker Elijah Haahr said Morris “is not just a Missouri legend; he is a national treasure.”

With the induction ceremony, a bust of Morris will now reside in the Hall of Famous Missourians, which is located in the third floor Rotunda of the Missouri State Capitol, between the House and Senate chambers.  Others in the Hall include Harry Truman, Mark Twain, Walt Disney, Laura Ingalls Wilder, and Josephine Baker.

Manufacturing And Mining Hiring Event To Be He...