Blaine Riddle received a Certificate of Recognition for his quick response during a house fire at his family’s home on Tuesday, Oct. 13th, 2020 in Washington County. The house was fully ablaze when Blaine realized his mother, Angie, and sister, Ezra, were still in the house. He found the two and got them out of the burning building. The Potosi Fire Protection District hosted a recognition dinner to honor Blaine for his act of heroism. Above, as the Potosi Fire Protection District volunteers and staff look on, Blaine Riddle is congratulated by Robbie Sterner, State Fire Inspector, awarding the certificate. The action of Riddle most certainly saved the lives of his mother and sister, said Potosi Fire representatives. 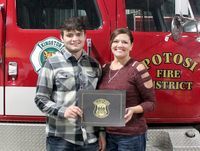