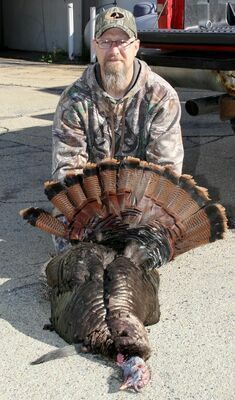 Early Monday, April 19th, 2021, there was a chill in the air and according to Wayne the turkeys were gobbling. Wayne Coleman was in the right place at the right time to take this 21 pound gobbler. The bird had a 9” beard and 3/4” spurs. Wayne said it was a great morning and he was working a gobbler that was behind him, the gobbler was ‘wound up’ and rattling the woods. Another gobbler hit in front of him and he started watching and listening both ways. Wayne said, “This gobbler were taking the picture of was headed straight for the one behind me. He was ready for a fight, but I stopped him a little short.”