Dylan Coleman’s Hard Work Pays Off! While Part of the ‘Cardinal Nation’ Locally, Royal Blue Has Been Popular 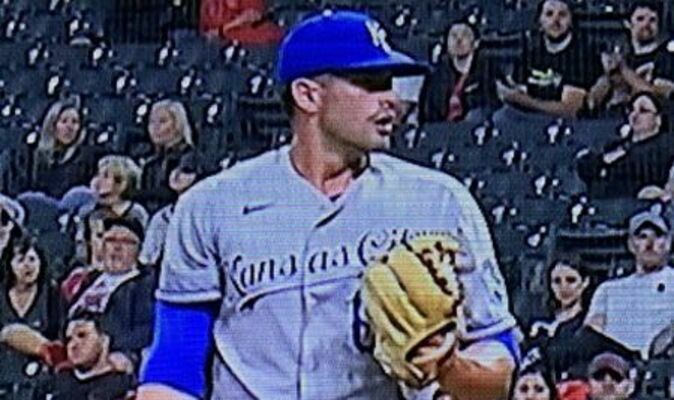 The area was humming on Sunday and Monday, Sept. 19th & 20th as word spread that Dylan Coleman had been called to the Major League by the Kansas City Royals.
Coleman, son of Dave & Lorraine, was a standout athlete at Potosi High School and graduated in 2015. He played baseball in Springfield at Missouri State University until the San Diego Padres took him in the fourth round of the 2018 baseball draft. Dylan was traded by the Padres to the Royals organization last year in the Trevor Rosenthal deal.
Dylan worked his way through the Arkansas farm club and was in the Omaha Triple-A organization when he was called to Kansas City and headed to the ‘Majors’ on Sunday, Sept. 19th. He made the trip to Cleveland as a Royal on Sunday night.

Dylan Coleman walked out of the bullpen door, took a step, then a hop and jogged to the pitcher’s mound on Tuesday, Sept. 21st in Cleveland against the Indians. His debut as a Kansas City Royal. Coleman, #65 on his jersey, threw 20 pitches, gave up a hit, struck out two to end the inning. Mike Matheny, Royals Manager, said, “This guy is nasty. The ball was jumping out of his hand. Everything we’d heard we got see first hand.”

Dylan Coleman went on to pitch against the Detroit Tigers and got to finish the 2021 season at home in Kansas City against the Minnesota Twins. He threw two scoreless innings with three strikeouts facing the ‘heart of the order’.
The 2021 season has ended with Coleman sporting a ‘Royal Blue’ jersey. The baseball fans locally have been excited for Coleman and at the same time watching the Cardinals with a 17 game winning streak and getting a wild card spot.
Continued good luck, Dylan Coleman, and everyone’s proud of you!

Manufacturing And Mining Hiring Event To Be He...