Trojan Football Won, Then Lost, Then Almost Won Against Knights 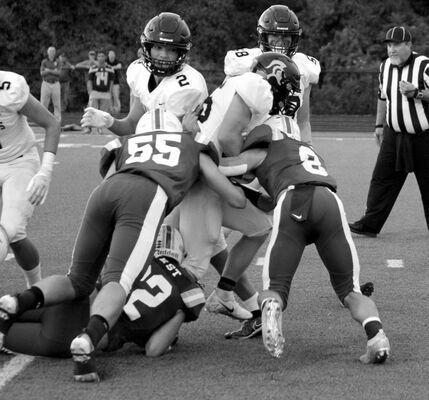 POTOSI FOOTBALL TAKES ON FARMINGTON – Friday evening, Sept. 3rd the weather was nice and starting to feel like ‘football’ at Trojan Field. The Knights pursue #87 Gavin Portell as he comes around the right side looking for running room. The Trojans played tough but again came up just short for the second week in a row. The Knights left town with the win, 23-18. Potosi travels to Fredericktown this Friday, Sept. 10.

One thing can be said about the 2021 Football Trojans - they are entertaining. Sometimes, there are glimmers of solid play, then sometimes not.

This past Friday, Sept. 3rd, the Varsity Trojans hosted the Farmington Knights. The Trojans were coming off a last second loss to the Owensville Dutchmen and the Knights had dropped their game against the North County Raiders. Both were looking for a win.

The Knights got the football first and burned a lot of the first quarter, grinding out some yardage. The Trojan defense stopped them and the Knights settled for a field goal. At 5:27 left in the first, it was Farmington 3 and Potosi 0.

The Trojans couldn’t do anything on offense early and had to punt. The punt was blocked by a Knight. Farmington’s ball on the Potosi 12 yard line. A couple plays later Farmington scores and it is 10-0 with 2:50 left in the first.

Almost immediately Trojan #8 Blake ‘Booba’ Henson busted a play down the left side for a 60 yard touchdown run. The extra point kick was blocked and it was Farmington 10 and Potosi 6 with 2:02 left in the first quarter.

As the Knights control the football again, the play goes in to the second quarter. Farmington’s quarterback was eluding the defense and gaining big yardage. At 9:52 in the second, Farmington scores again and it is 17-6, Knights ahead.

Potosi was doing a little better on offense and got a favorable call with pass interference that helped their cause. It was first and goal for the Trojans and #7 Blake Coleman dropped a screen pass over the line and #8 Blake ‘Booba’ Henson was in for a score. Knights 17 and Trojans 12 after a failed attempt at a two point conversion.

Time was winding down toward the half when Potosi stopped Farmington’s offense, got the ball and were grinding out yardage of their own. At 3:17 #8 Henson picked up a big first down on a fourth and three play that got the fans excited. #32 Zane West picked up another important first down as time was under 2 minutes. The Trojans were within striking distance and trying to score with just ticks left on the clock. #7 Blake Coleman threw to the end zone and was intercepted by a Knight. Farmington ball to end the first half.

The third quarter saw Potosi get the ball first, gain a little yardage and fumble with Farmington recovering. The Knights returned the favor as less than a minute later on the clock, Farmington fumbled and #65 Tucker Juliette recoverd the football for Potosi. The play was getting a little better on both sides of the ball for the Trojans as toward the end of the third quarter Potosi stopped Farmington on a fourth down and four and took over possession.

#8 Henson again broke a big run as he split the left side of the line and blazed a trail toward the goal line. Henson was caught on the 10 yard line by a Knight. It was Potosi’s chance to score as the time rolled over and the fourth quarter began.

Just five seconds in to the fourth it was a 10 yard touchdown pass from #7 Blake Coleman to #10 Blake Missey. The extra point attempt was no good and the score was Potosi 18 and Farmington 17.

The Knights has an answer of their own, running the ball, using some time on the clock and scoring again. Their extra point kick was no good, wide right. Farmington 23 and Potosi 18.

Potosi got the ball and kept the clock running, heading toward the end of the contest. The Trojans got important first downs with #8 Henson carrying the football again. #7 Coleman connected again with #10 Missey for a big first down to keep their drive alive.

Just under three minutes left and the Trojans were on the Knights 35 yard line. Down to 2:03 on the clock and Potosi calls a timeout, looking at a fourth down and fourteen to go. #7 Coleman finds #10 Missey for a complete pass and enough yardage for the first.

The time was running out. The Trojans were threatening. A game shouldn’t come down to the final seconds, should it? This one did.

42 seconds - Complete pass to #10 Missey in the endzone at the left corner from #7 Coleman. Touchdown. Flag in the backfield on the far right side of the field. Too many men in the backfield (five) and the score comes back.

32 seconds - Incomplete to #10 Missey. Potosi on the 12 yard line with a fourth down and six yards to go.

25.8 seconds - #7 Coleman, quarterback goes for the goal line. A big push, no signal. The Trojans on the field think touchdown, no call from the referees and the game clock runs out.

Can it get any closer?

This week the Trojans travel to Fredericktown to meet the Blackcats on their turf.